Are you heading to Las Vegas for a trade show event?

Convention hosting in Vegas, an industry in itself, dates back to frustrated 1950’s hotel owners and their desire to get over and make money throughout, which is the hump of the out of season months.  By 1959, the Las Vegas Convention Center (LVCC) had officially opened for business and currently sizes an enormous 3.2 million square feet of show space, which goes some way to explaining the size of the popularity of a Las Vegas convention.  From the city’s point of view, the event hosting business represents a massive financial incentive for the entire town. The 4.5 million conventioneers that arrive annually spend double the amount of money than the gaming and holiday tourists across the year, making it as critical a component of the Las Vegas revenue stream as the card tables.

So here is a list of THINGS to DO while you are attending that next trade show event in Las Vegas and have some extra time not being spent in a trade show booth:

The High Roller baby! It isn’t your average Ferris wheel. In fact, some Las Vegans get downright testy when you call it that. The High Roller is an observation wheel — the biggest in the world as a matter of fact. It stands at a who 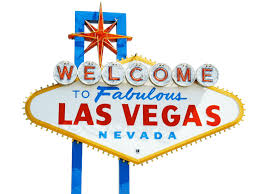 pping 550-feet-tall. That’s nine feet taller than the Singapore Flyer (who knew) and 107 feet taller than the London Eye (Take that you Lymies!). The High Roller is located in the heart of the Strip and is the focal point of the LINQ promenade. Once aboard the 40-passenger pod you will have 30 minutes to enjoy a cocktail and the view. Whether you choose to ride day or night, you will have spectacular views of the Strip, the valley and the mountains (see if you can spy some Red Rock’s to the west). 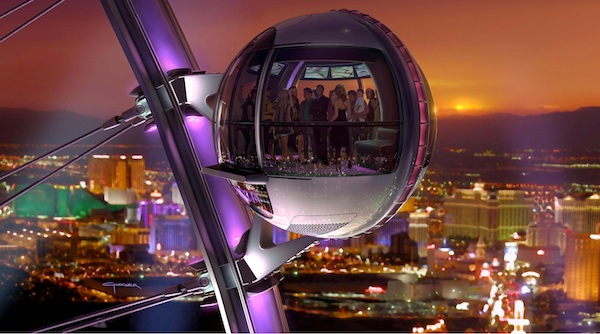 Some of you EXHIBITOR dinosaurs will remember the Imperial Palace. And you may even be wondering, “What the heck did they do with all of those sweet @$$ cars?” Well wonder no more!

The Auto Collection is still there at the LINQ with over 350 classic cars that span more than a century. It’s an auto enthusiast’s dream! And if you’ve never been or maybe it’s been awhile (15 years is really more than awhile. But who’s counting right?), it’s certainly worth a gander. And did you know that every single car is available for purchase? Even if you don’t have thousands of dollars to spare, you can stand by these beauties and snap as many pictures as you want, for FREE!

Speaking of FREE… Here are some great attractions that are just that… FREE!

1. The Aquarium at the Silverton – Located at the Silverton Hotel, South of Mandalay Bay on Blue Diamond Road and I-15, is an 117,000-gallon saltwater aquarium complete with Mermaids. While you’re there, take a stroll through Bass Pro Shop to round out the aquatic-themed adventure!

2. P3 Studio at The Cosmopolitan  – I LOVE The Cosmopolitan! And located on the third floor of The Cosmopolitan is a glass-walled artist studio featuring contemporary artists from around the world who create interactive artwork as part of a residency program. You can watch the artists from outside the studio or go inside, interact with the artist… maybe even help create a masterpiece. You can see P3 Studio’s artist-in-residence in action Wednesdays through Sundays, 6 p.m.-11 p.m.

3. The ‘Welcome to Las Vegas’ Sign – After hanging with mermaids and artists, you must stop at this 50-year-old iconic sign for a memorable photo op. I’m not going to lie, I was very relieved when they actually made a parking area for tourists to park and snap their pictures. Sure beats the heck out playing Frogger with the tourists trying to cross the boulevard. Stop, snap some selfies, and if a ‘GOOD’ Elvis is there, tip him $5 bucks to take your pic with him. 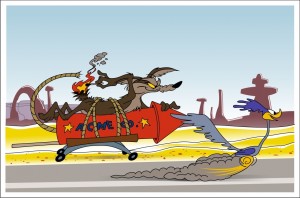 4. Ethel M Chocolate Factory & Botanical Cactus Garden – Last but certainly not least is this sweet factory located about a 15-minute drive east on Tropicana from the Strip. Forrest Mars Sr. (of M&Ms fame) opened this factory in 1981 and named it after his mother Ethel. There is a short tour that lets you see chocolate in the making through the factory’s windows. The factory store at the end allows you to sample and purchase these sweet confections. While you may think you can skip the Botanical Cactus Garden… DON’T! Featuring more than 300 types of cactus it also has a soft spot for me in that the first roadrunner I ever saw in the desert was in that cactus garden. Keep you’re eyes peeled! Wile E. Coyote must not be too far behind right?

NOT the Same Old Stuff in Las Vegas

1. Springs Preserve – This 180-acre cultural and historic attraction sits on the site of former natural springs that contributed to “Las Vegas” – the meadows in Spanish. It features many exhibits, a Botanical Gardens, trails and The Springs Café.

2. National Atomic Testing Museum – It captures all of the history, propaganda, and controversy of the nuclear tests that once took place only an hour away from Las Vegas. See 10,000 sq. feet of interactive displays, short films, timelines and much more. You can even test your own radioactivity! 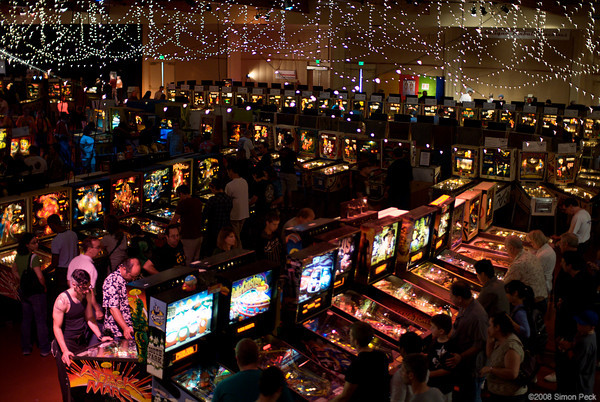 3. Pinball Hall of Fame – Featuring a total of 141 pinball machines from the 1950s through the 1990s, including retro arcade games like Super Mario Brothers. The best thing of all? You can play every single one of them. Just remember to bring a pocketful of quarters.

Down Las Vegas Boulevard from Mandalay Bay is Michael’s Gourmet Room at the Southpoint Casino. It’s a longtime locals favorite and a hidden gem. Michael’s is a throwback to the glamour of the Rat Pack era with captains, uniformed staff, velvet banquets, intimate size, and exquisite service. The old school menu features forgotten dishes like saltimbocca, escargot, chateaubriand for two, and a signature intermezzo of sorbet with Dom Perignon champagne. The food, the service, and the setting… It all works here.

On the opposite end of the strip is The Top of the World Restaurant at the Stratosphere. It’s perched 844 feet above the city and revolves in place, rotating a full 360 degrees every 80 minutes for a birds-eye view of Las Vegas. The view attracts tourists, but it’s the menu of re-imagined classics that makes it hard to get a reservation. In addition to a generous helping of ambiance, the menu boasts delectable seafood, prime-cut steaks, and decadent specialties. While there, you can visit the observation deck. The Stratosphere boasts several thrill rides that are not for the faint of heart. My recommendation, make a choice… rides or restaurant and stick to it! The two aren’t very compatible.

At the center of the strip, there’s the new LINQ area. Guy Fieri, of Food Network fame (graduated from UNLV don’t ya know) opened his first Las Vegas Restaurant, appropriately named Vegas Kitchen & Bar. Yardhouse has an installation here too, as well as Brooklyn Bowl, Tilted Kilt, and Sprinkles Cupcake ATM. Yep, you can now get your cupcake fix 24/7 in Vegas! Chayo Mexican Kitchen and Tequila Bar, Haute Doggery, Flour & Barley, and F.A.M.E round out the line-up of eateries in this lively new section of the strip.

Finally, there’s the buffet. The Bacchanal Buffet at Caesar’s Palace is the “sex, drugs, and rock-and-roll” of Vegas buffets. Bacchanal Buffet is what happens when you throw $100 million budget at a buffet renovation. The Bacchanal Buffet is not only a feast for your tummy but also for your eyes. The dining room is broken into air, water, or wood-themed sections. And then you have the more than 500 daily offerings many of which are prepared in front of you. The menu changes daily depending on products, season, and chef’s whims. Must tries include fried chicken and waffles, red velvet pancakes, mini Wagyu sliders, Japanese curry, and a made-to-order dessert crepe.

Depending on your culinary mood, you might want to give these Off-The-Strip Delights a try:

If you have any other tips - please forward them to us for next year's blog post!!  In the meantime, if you need help with rental trade show exhibit in Las Vegas - please give us a call! 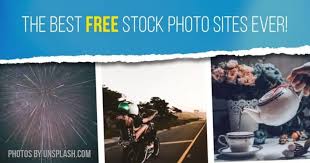