Gov. Pritzker Believes Conventions Can Return To McCormick Place As Soon As Summer

As the pandemic rolls into a full year, we haven’t seen the huge crowds at McCormick Place and other convention centers around Illinois. But the sources said the light is at the end of the tunnel – and with it lots of money. With mass vaccinations under way, sources said Pritzker believes conventions at McCormick Place and around the city will get under way as soon as this summer. Last March, when the pandemic hit, conventions screeched to a grinding halt. The outcome trickled down to hotels and nearby restaurants. The lack of conventions resulted in a revenue loss in the billions for Chicago, Cook County, and Illinois. A total of 187 events were canceled from March 2020 through mid-January of this year. Those shows were expected to generate more than $1.6 billion in spending. Just last week, the Inspired Home Show announced it was calling off its convention for this year, which had been scheduled for August.

But now, a quick glance of the McCormick Place website offers hope too. There are events postponed for 2021 instead of downright cancellations. Last year, the 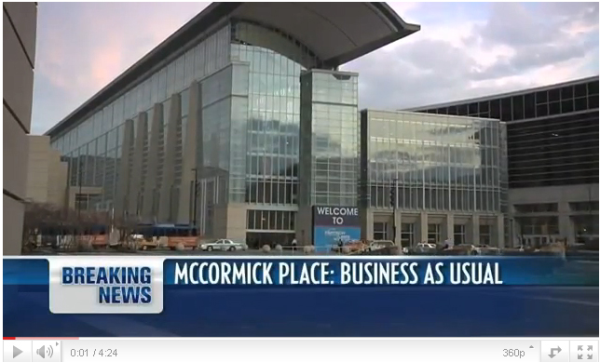 Chicago Auto Show wrapped up before the pandemic hit. C2E2 also went ahead in late February – by which point the coronavirus was a concern, but little need was seen to take action beyond keeping disinfectants around and washing hands. But everything changed in March 2020, and has not changed back.

At the height of the first surge of the coronavirus pandemic in the spring of last year, McCormick Place was pressed into use as an alternative care facility. This year, the cars and people did not fill McCormick for the auto show. But that doesn’t necessarily mean it’s called off. The Chicago Automobile Trade Association tells CBS 2 it is meeting with representatives from the state on Thursday about bringing the Auto Show back – late, but sometime during the year.

Plenty of new safety measures are ready at McCormick for whenever the crowds return. And while sources said the governor is optimistic about people piling into McCormick Place, the city is the ultimate decider.