Today, we have the best possible equipment and techniques for video, sound and lighting. So why is it that AV at trade shows still manages to miss the target on occasion? Nevil Bounds muses on AV and its pitfalls on the show floor.  He shows you the pro's and con's of making the change, too much too little, lighting issues (at a trade show you do not have control of how much light is going to be on your booth), and the fact that you get what you spend on your AV rental.

The CHANGE FROM "PRINTED" TO FILM 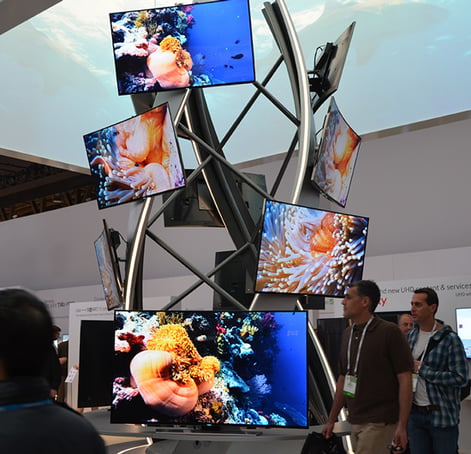 Just looking back at all of the trade shows I have attended since the mid 70s, the fundamentals haven’t really changed a great deal. The requirement being to attract as many people as possible onto your booth, wow them with the product or service that you were offering and ask for the order.

This is a massive simplification I concede, but you get the idea. However, so much of what was being shown on exhibition booths way-back-when was printed material. It was up to the visitor to read and interpret the material and this very often led to a longer ‘dwell time’ on the booth. Sales people could then have more time to talk to the visitors and find out what it was they were interested in.

I seem to recall that in the late 70s we started to see 16mm filmstrip projectors, 35mm Carousel type projectors and even Super 8mm endless loop projectors whirring away for days at a time. With all the unreliability that you would expect from that harsh working environment. This was all very high tech indeed!

I have always found the automotive sector to be a good barometer of the health of the AV industry. The really large manufacturers wanted to show off their brand new models at huge launches across many continents. I have met so many of my industry colleagues through working on these kinds of shows and that is mainly because these sorts of events demanded high quality personnel such as directors, lighting designers, sound, video and effects operators.

These exhibitions, product launches really, were often staged in giant venues that were perfectly suited to these types of events. This kind of staging is very specific to what the client is looking for and draws on many different kinds of techniques in order to make a real impact.

But what if you are just using small amounts of equipment at a trade show where you just want all of the technology to run itself and require no intervention from AV people?

Of course, this premise has been used for decades now – ever since the advent of smaller video playback devices and flat panel displays. It still makes me wince when I remember installing a number of the Technicolor ¼” video cassette players around many exhibition booths. Then being slightly surprised when they started to fail because they had been running for eight hours a day for a five-day exhibition.

Today, I am pleased to say that we have moved on to solid state technology for our video playback medium. The reliability is unsurpassed but actually this has brought about a couple of problems which no one really expected to see...

TOO MUCH VIDEO AND AUDIO

Yes, you certainly can have too much. Far too much. One of the things about the high quality video playback that we can now achieve is that we ‘expect’ it. There’s no longer anything exceptional about seeing a 4K image on a display, because we can get this at home. The consumer products have led the professional products in this sense and it’s something that we are becoming very familiar with.

Having lots of video playing on a loop on your booth might be very convenient and may be occasionally eye-catching. But having all of the audio that’s associated with it can result in a cacophony of noise. Under those circumstances and in a highly reverberant environment such as an exhibition hall, it makes it virtually impossible to have a meaningful conversation.

There are a number of speaker solutions available that help reduce the audio spill that you get in these situations. Products such as:

are just a small representation of the kinds of technology that you might like to look at when trying to focus your audio in a specific area. This kind of technique is remarkably effective in reducing the background levels of sound when you have multiple devices running all at the same time.

This is probably one of the most criticized parts of an exhibition booth. It takes a good design and a lot of ‘fiddling’ during the set-up period in order to make your stand look nice.

I don’t think there is ever a perfect solution, especially when you are competing with the horrible color temperatures and mass flood lighting that you get from every exhibition center that has ever been designed. But if it’s not even close to being right, then it will definitely affect how your booth is perceived; let alone the staff manning the area.

With the use of LED lighting, things have become more manageable. Certainly, in the areas of color temperature, controllability, running costs and how cool the systems run, LED is a massive improvement over the technology that we have all used in the past.

As we see tablets, and very large ones at that (like the Giant iTab) being used at shows, you need to consider the actual light output that they emit in their own right. Also, it’s vital not to end up having light spillage onto the display service. Obvious you would think, but I have seen so many booths where it wasn’t possible to view the content properly because of the bad positioning and type of lighting used.

The CES show in Las Vegas is always impressive – and innovative – when it comes to the use of lighting. Take a look at the different solutions in this list of highlights from 2017, especially the eye-catching Elgato booth (number 11 in the list) which used Ligeo LED light tubes that seemed to float in mid-air.

Yes, I know the budget’s already gone through the roof, the booth space has increased by 15% from last year and we booked the hotels late so we didn’t get a good rate etc...

This is my point really. Exhibiting has never been an inexpensive way of showing your wares to the world and with all of the costs surrounding the show, it’s vital that you get the most out of it. Spending a little bit more on the content, or the way of displaying the content on the booth, will make it look more professional and, if it’s done particularly well, will be a highly memorable thing for your potential clients to take away.

Nevil Bounds has been in the AV business for over 40 years. He runs his own media production and recording studio at home and regularly appears on industry panel discussions. He co-hosts the Plane Talking UK Podcast which is broadcast every Friday at 19.00 UK time. http://www.planetalkinguk.com His own website is http://www.nevtech.org.uk